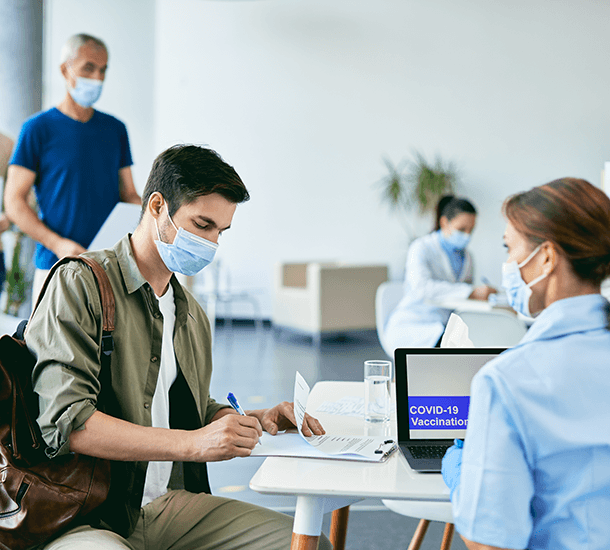 The US Centers for Disease Control and Prevention did concur with the FDA and has issued guidelines supporting the use of COVID boosters as we outlined last week. Basically, anyone with any degree of risk, whether that is a personal medical risk or high risk of exposure through occupation or living situation should consider getting a booster any time after six months following their second shot for an mRNA vaccine or 2 months following a Johnson & Johnson vaccination. Furthermore, for Johnson & Johnson, the booster is available for anyone, not only those at risk. The data has not shown new vaccine risks, although it is still early and the data set is small, but the data on increased hospitalizations after 6 to 8 months out from vaccination is compelling.

A second compelling argument for vaccination and booster is the experiences in Israel and Japan. Economically, these countries are similar to the US, and both had significant summer waves, even higher than the US. Japan, which had been lagging on vaccination shifted to high gear during their summer wave and has a vaccination rate now approaching 70%, while Israel, which was already at a high level of vaccination at over 75%, added a booster for most people. In both countries, these strategies, combined with requirements for vaccination or testing for closed indoor environments, rapidly drove their rate to almost inconsequential, where is it today.

The second development is the meeting of the FDA vaccine advisory committee to review Pfizer vaccination for the 5 to 11-year-old age group. On Tuesday, the Advisory Committee voted without objection to recommend authorization. By next week, the FDA leadership should sign off on the amendment to the Emergency Use Authorization and the CDC Advisory Committee on Immunization Practices, which produces the actual instructions to practitioners is scheduled to meet next Tuesday and Wednesday. The Director of the CDC typically signs off on their recommendations within 24-48 hours, especially for something they have already been following closely. There are some logistics issues to be addressed, especially since the approved dose for this age group is one-third that approved for older children and adults, but most anticipate shots to begin no later than November 8 for these children. This is a two-shot series with 3 weeks between doses and the standard 2 weeks on top of that until being considered fully vaccinated, so while this does not mean that these younger kids can be fully vaccinated in time for US Thanksgiving, many should be vaccinated in time for Christmas and other end-of-year holiday gatherings.

Importantly, in the studies done leading up to this authorization, there were no serious adverse reactions noted while efficacy against any symptomatic infections was greater than 90%. Children are already at low risk of developing significant disease with COVID, so while a vaccine can be beneficial to them in terms of reduced episodes of quarantine and isolation and the concomitant missed school, because of the low disease risk, the vaccine has to be extremely safe to justify dosing children. Fortunately, this has been the case. Importantly, though, these studies are still relatively small, so post-authorization monitoring will be important. Recall that myocarditis issues did not manifest in the authorization studies for older children but appeared in the post-approval surveillance. On that point, remember that a diagnosis of myocarditis does not imply a damaging level of disease. Males are a higher concern than females with about 4.2 cases per hundred thousand in the 12-15 year age group and 77% of cases were treated and were without consequence. In the final analysis, the risk of hospitalization for unvaccinated and infected versus the risk for vaccinated and development of myocarditis is highly dependent on the background rate of COVID in the community. If our COVID rates were to pick back up, as they have in the UK, then the COVID risk far outweighs the vaccine risk, but if the rates were to continue to decrease, then the opposite would be true.

In the US, cases are continuing to decrease on a week-over-week basis, but the rate of decrease is shrinking and the last couple of days have seen some atypical increases. There are always going to be blips on any curve, but this bears watching. Cases in the UK continue to increase, but the rate of increase there has turned down over the past 3 weeks, leading to hope that this current wave may be receding. The push to vaccinate adolescents may finally be having some effect but calls for further restrictions continue to grow. So far, the Prime Minister has resisted this pressure, but if the rate of increase picks up again, it is possible his hand may be forced. Europe now has seen 6 consecutive weeks of increases, but on deeper evaluation, these have been confined mainly to eastern Europe, especially in countries adjacent to Russia, which continues to set new records for numbers of cases. In Asia, Japan has nearly eliminated COVID cases, while other Asian countries are fairly stable at relatively low case rates.