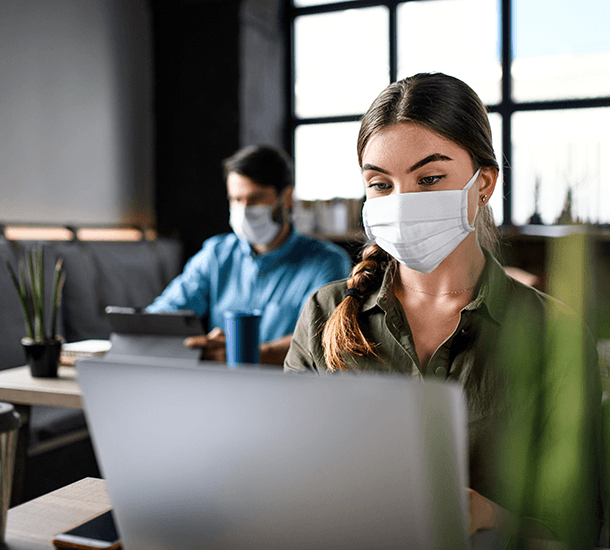 Last week, there was some concern that the nearly 6 week-long steady downtrend in cases in the United States appeared to be leveling off. This has, in fact, happened, and currently has been flat for about 10 days. Some of the factors contributing to this flattening include continued pandemic fatigue, potential effects from both President’s Day holiday and the lunar New Year holiday in mid-February, and, possibly, loosening of some formal control measures in certain states, although there is some debate on the last point. Some states with tight restrictions are doing worse than states that have relied more on public education programs versus health orders. The fear that March will bring a significant uptick in cases due to an increased presence of more virulent strains of the virus does not seem to be taking place, although the number of these cases continues to grow. The take-away is that we are not out of this yet, and continued attention to measures to reduce transmission will remain important for at least the next 2 months.

In Europe, cases are still at a level lower than the US, but they also have had a steady increase over the last 3 weeks. This has been led by significant case growth in Eastern Europe. Whether or not this is due to the growth of the newer strains remains a debate, but one thing that is clear is that vaccine rollout in Europe has been well behind the United States, reducing the EU to trying to redirect vaccine supplies to hot spots and resulting in a reactive rather than a proactive strategy. Central and Western Europe remain fairly stable. East Asia, Australia, and New Zealand continue to be hypervigilant to any increase in cases to the point that if simply listening to news reports about control measures, one might think they are at levels similar to the US and Europe, but in reality, the total number of cases in this region is fairly negligible.

Another at-home COVID-19 antigen test was approved this week, bring the total to 4, including a Chinese manufactured kit that appears to be unavailable, Ellume, from Australia, that is not yet shipping in quantity to the US, BinaxNow from Abbot which was almost entirely purchased by the US government for distribution through the states, but is nearly unavailable and often going unused on shelves, and finally, this new test from Quidel, a respected major manufacturer of other point-of-care tests, although no availability information has yet been made public. In short, there generally are no “home tests” that are routinely available. If you can get one of these antigen tests, a positive test is reliable, but a negative test will miss disease about 15% of the time. Still, like other antigen tests, the prevailing thought is that because of the low cost and rapid results, they can be useful for a risk-reduction program, but they should not be looked at as a means of completely clearing someone from the presence of disease.  In most states, testing via PCR ship-away kits or testing at clinics or pharmacies is the most reliable way to get tested. The ship-away kits are reasonably accurate and reliable providing results by the day after shipping or early the following day. Local testing options are still taking 48 to 72 hours unless an additional fee (typically $100 – $300) is paid for expedited services at a private lab.

Multiple international authorities are stopping programs of research on convalescent plasma for treating COVID-19. The preliminary data has not shown significant benefit, but perhaps as importantly, the availability and efficacy of monoclonal antibody treatments have been found to be very good, so the demand for convalescent plasma is minimal. There are also multiple new agents in trials for all phases of COVID-19 management, but no significant new developments to report. The data on monoclonal antibody treatment for anyone with risk factors, including age, who has early COVID-19, is excellent. Unfortunately, the treatment is not easy to get. If you or someone you know has contracted COVID-19 and has risk factors for severe disease, find a facility that will infuse monoclonal antibodies as soon as possible.

As of Wednesday, 107M vaccines have been delivered in the US and 81M administered. Between people who have been fully vaccinated and those that are far enough out from their first dose to have significant resistance, that means about 40M people are resistant to disease through vaccination, another 30M known to have had COVID-19, plus another 60M who are believed to have had COVID-19 but never received a confirmatory test. That’s a total of 130M or nearly 40% of the population who now likely have significant immunity.

Adding these numbers together with the planned vaccine deliveries over the coming months, it appears that every adult who wants a vaccine should be able to be vaccinated by the end of April, if not sooner. In practice, this means that by the end of next month, we will have about 100M to 120M people vaccinated plus another 100M who have likely had COVID-19, so north of 200M with some degree of immunity. If we accept that we need to reach 70% of the population for immunity, then that only leaves another 20 to 30M to reach herd immunity, and Immunizing that many should take about 2 weeks. Of course, we don’t know if we should assume 70% represents herd immunity, but it is a reasonable target. We will only really know the level of true herd immunity in retrospect, plus it’s not a light switch as we will see continued reductions in cases as we have more and more people relatively immune.

The most important point is that all three vaccines provide very strong protection against infection and severe illness or death due to SARS-CoV2. That was the target goal and all three vaccines have achieved it. In other comparisons, however, Johnson & Johnson does not look quite as effective as the mRNA vaccines in preventing any illness, which likely also means that vaccination is not as effective as preventing infections, but the data is not in on that for Johnson & Johnson. For the mRNA vaccines, there continues to be a growing body of literature that says vaccination can reliably, but not perfectly, prevent infections. But remember, to reach herd immunity, we don’t need perfection…just a major impact on infectivity will mean that there are fewer susceptible hosts when the virus looks to jump from person to person.

The bottom line is that the best vaccine for you is the first one you have access to, but in the long run, the Johnson & Johnson vaccine may be better for younger populations and especially those populations that cannot be confidently reached for their second dose.

First, all of the vaccine manufacturers are working on modifications to their vaccines that will address variants. The good news is that it appears that these variants continue to exhibit good sensitivity to complete vaccination with the current vaccines, but there is some decrease in susceptibility with at least one of the variants. The net result of this may be that a “booster” which would actually be a new vaccination, may be required at some point in the future. There is enough susceptibility to the current vaccines that it is extremely unlikely that this will derail the steady move towards full re-opening of society and commerce, but to keep a lid on future outbreaks, an additional jab may be recommended.

The second point is regarding what getting a vaccination means to you as an individual and how that should change your behavior. Over the weekend, Dr. Fauci was asked if he was going to see his children and grandchildren now that he and his wife have been vaccinated. He said that he would wait until they, also, have been vaccinated. That is consistent with CDC recommendations and is the most conservative approach. It would be inconsistent to advocate another course, but at the same time, the data does show that the vaccine does nearly completely prevent serious disease and death and very likely also significantly reduces the risk of infection and infectiousness. Putting that together, it would not be unreasonable that some people may do a balance between the benefit of spending time with loved ones that they may not have spent much time with against the low risk of infection and mild to moderate COVID-19 illness and decide the time has come for some, at least, limited interaction. It is still prudent to wear masks in public, social distance where possible, and avoid large gatherings as CDC still says that all these things will contribute to reducing the overall rate of disease in society. But all-in-all, vaccinated people otherwise in good health do not need to worry that hugging a grandchild carries a huge risk of getting a fatal case of COVID-19. A good way to look at it is to consider how you change your activities during a moderate flu season. The data says the actual individual risk of severe COVID-19 disease or death to someone immunized is probably lower than flu in that moderate-season setting. Ask yourself how you change your behavior in a moderate flu season.