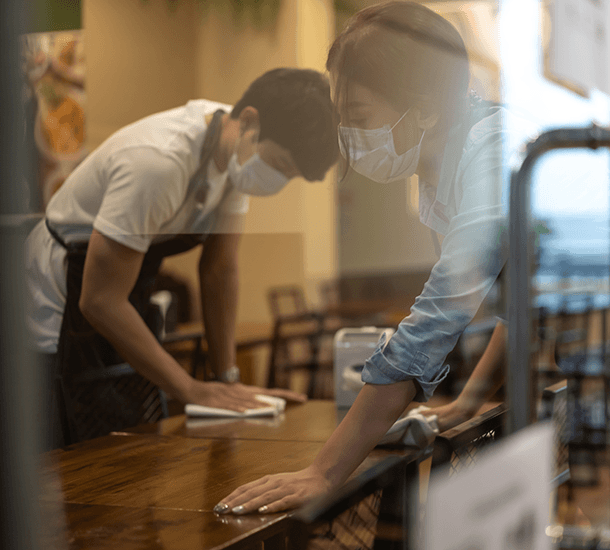 In the US, cases are down about 20% from their post-New Year peak and similar downward trends are seen in Asia and Australia. The European Union is well down from its late fall peak, but currently relatively plateaued at a level still showing widespread, uncontrolled community transmission. The overall EU level is still slightly lower than the overall US level, but the US trend is more steeply downward. ICU admissions and hospitalizations are also down in most locations, but deaths do continue to be slightly higher. Keep in mind that deaths reflect new cases two to four weeks ago, so this is not unexpected, and we should see this starting to move down over the next two weeks.

The best-case analysis of this is that we have reached peak infection and that the combination of factors will keep the rate of new infections decreasing. These key factors are:

Unfortunately, there are headwinds that may work to push cases back up; the most important of these being the new variants that are emerging. These new variants have features in common that enable them to enter cells more easily where they can replicate. So far, the main effect of this is that these new variants have increased infectivity. This includes some early, but so far unconfirmed evidence that these variants may more easily infect children, who have up to now had a very low infection rate. But while infectivity appears to be higher, the severity of the disease seems to be about the same. This does not make complete sense because facilitated entry into cells leads to higher viral loads and higher viral loads should lead to both increased infectivity and severity of the disease. But that is not what is being seen in the areas of the world where these strains are predominate. At present, what we know so far is primarily observational data as these mutations. A common question about these new changes is how similar changes could evolve in very different parts of the world, including at least the UK, South Africa, Brazil, and possibly California. The answer is fairly simple. The most important change that is shared amongst these new strains is a specific change that makes binding to the target cells easier. When this specific change happens through random chance, it tends to take over. With the growth in the number of cases in many areas of the world, this random change happened in multiple places and proliferated over the older version.

Importantly, all data indicates that the current vaccines are still adequately effective against the virus. Moderna does note that they do see reduced effectiveness of their vaccine at the cellular level in the laboratory, but the protection level against the new strain is still high enough to control the disease. Additionally, both Moderna and Pfizer have indicated that they are working on updates or additions to the mRNA sequence in their vaccines that can be added to the vaccine for either new vaccinations or as a booster at some point in the relatively near future. Still, this is an area to watch as any degree of decreased effectiveness is concerning, but when starting at a 95% effectiveness and remembering that flu vaccines are often less than 50% effective, these vaccines have a lot of headroom.

Most observers had expected that distribution numbers would be on a steady upward trend throughout January. The fact is that distribution has been flat at around 4.5 million doses distributed each week, evenly spread between the two manufacturers, with roughly half of the delivered doses earmarked for the second dose. Both manufacturers are bringing additional plants on-line, but they are not disclosing their expected ramp-up rate. In a major unprecedented development, one of Pfizer’s historically major competitors in the vaccine market, Sanofi, announced that they will be partnering with Pfizer to manufacture the Pfizer vaccine in their factories. The retooling required will likely take a couple of months, but this will have a major impact over the summer.

Additionally, the word from Johnson and Johnson is that they expect to release the data from their phase 3 trials early next week, which should mean that the Johnson & Johnson single-dose vaccine will likely be considered for EUA at the regular Thursday advisory committee meeting either on February 11th or 18th. Given the slow pace of increase in available doses, I would expect that the FDA will push hard for the earlier date, especially since they have been following along on the phase 3 trials since they started.

This is not all about production and strategic distribution, however. Many states have only administered a fraction of the doses made available to them. This is steadily improving, however, especially as several states are beginning to utilize partnerships with major pharmacy outlets that are experienced in routinely administering vaccines. Additionally, when you do hear shocking low numbers, remember that the media often ignores that roughly half of vaccines delivered to the states have been held to provide the second dose to people who received their first. This holdback percentage will get smaller as the rate of distribution becomes predictable and the first versus second dose administration rates are stabilized.

The shortage period for vaccines may end up lasting much shorter than we think based on the number of people in certain settings that are declining vaccination. The more that declines occur, the harder it will be to get to herd immunity, but the easier it will be for people who want a vaccination to get one. This does have the potential to be destabilizing as there is an over-representation of medically underserved communities in the portion that is declining vaccination. If this results in relatively increased needs for hospital services, this will exacerbate the divide between the hospitals serving these underserved populations and hospitals serving insured populations.

One other quick note on vaccines is the observed rate of severe anaphylaxis has decreased by about 50% since the first couple of weeks of the program. It may be that the guidance to people with severe allergies should consider deferring for now, but in any event, the rate is down from about 11 per million to 5 per million. That is still over double the rate seen with most vaccines, but not an impediment to the program. Importantly, there has still been no deaths or severe illness attributable to the vaccine.

Eli Lilly released a study showing a significant reduction in disease for patients treated with their antibody drug shortly after a known exposure but before symptoms develop. For high-risk patients, this could be an important development, although it is unclear when Eli Lilly will be able to make the EUA application. The use of antibody products from both Lilly and Regeneron is still well below expectations, but the data is increasingly good that these treatments can make a big difference and rapidly. While not appropriate for all people, if someone has known risk factors and a close exposure or mild symptoms with a positive test, please push for receiving this treatment. This is an IV treatment that must be given in a hospital or in an infusion center, so the logistics are a bit difficult.

A new drive in the media is pushing for double masks whenever in a masking situation. Literally, this means wearing two masks, one over the other. In this case, Dr. Fauci said, “it’s just common sense that double masking is better.” This is one of those things that will be difficult to prove. Double masks were originally pushed for medical personnel when masks were in short supply. They were told to wear an N95 (often for days at a time) and to wear a standard surgical mask over it to keep it clean. That made sense for protecting a scarce resource.

The argument being advanced for double masking is that more layers trap more droplets. In fact, there is good evidence, that showed a three-layer mask is optimal: an inner and an outer layer of natural fiber and a middle, or filter layer of a non-woven random strand synthetic fabric. The cotton layers basically slow and catch most anything with moisture and the filter layer stops small particles. This type of cloth mask was found to be even more effective than a standard surgical mask.

One of the biggest issues with masks is that we have learned that aerosolized particles are important in transmission. These particles very easily go around the edges of a non-sealing mask such as anything less than an N95. The bottom line is if it makes someone more comfortable wearing two masks, then more power to them.