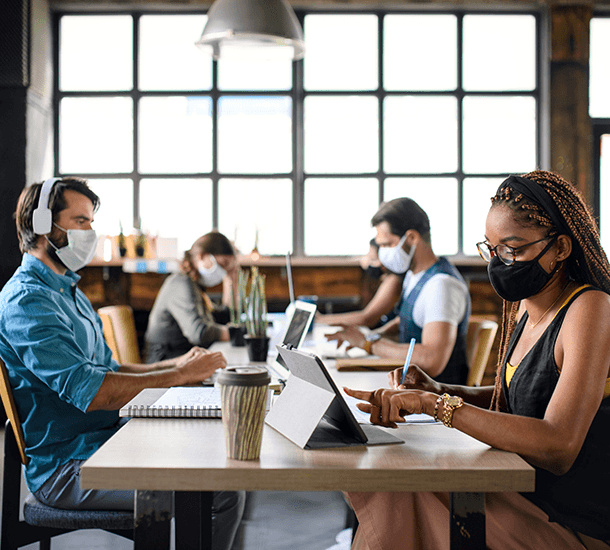 In the US, the seven-day average of cases is down by over 46% from the peak during the second week of January. This is very much along the lines of what was predicted in late fall following the large peak associated with the end-of-year Holidays. Case rates have remained essentially flat in the European Union for the past two months following the late fall peak. Japan has seen steady declines in case numbers since a significant peak in early January, while cases in Hong Kong and Singapore are somewhat decreasing but still at a very low level. Hospitalizations and deaths have also turned in the right direction as we would expect following the downward turn in cases about 3 weeks ago.

Unfortunately, this is not the time to let our guard down, as most authorities believe this respite may be short-lived because of The UK and South African strains that are rapidly spreading. The current expectation, at least in the United States, is that cases will continue to drop during February, but there is a high risk for a resurgence of cases in March as the new variants are roughly 50% more infectious than the current main strain and will likely become predominant.

At the same time, however, the countries around the world that have been the most hard-hit with COVID-19 continue to move closer to herd immunity. It is important to remember that herd immunity is not a switch with cases suddenly stopping when a threshold is reached, but instead more like a buffer that makes it increasingly harder for new outbreaks to get a foothold as there are fewer susceptible people for the virus to jump to.

One thing that is very clear however is that governments around the world have learned their lesson from opening travel widely over the late summer. Travel was very clearly one of the contributing factors to the high rates in the fall and around the holidays. Now, in response to the fears around what the new variants may do, even though rates are currently going down, an increasing number of countries are putting travel barriers into effect including testing requirements and required enforced quarantines on arrival. Anyone who is considering international travel should pay special attention to these new requirements and recognize that governments may add restrictions on very short notice. Remember that a year ago, one of the key factors in kicking this pandemic off was the extensive global travel associated with the Asian lunar new year, which this year is in the middle of this month. Governments around the world do not want a repeat of that spark.

So, what does that mean in practicality? If your question is: is somebody, right now, infectious? The low cost and relative ease of testing of the antigen test overcomes a relatively small difference in sensitivity. The advantage of PCR testing, however, is that often PCR testing can identify that someone is early in their infection and will become infectious over the next 48 to 72 hours. A related problem is that on the recovery end of infection, PCR testing can continue to report positive long after a person has cleared their infectivity. This rarely happens with antigen testing.

With this new understanding, PCR has a much better chance of picking up a soon-to-be infectious person before they have a chance to infect anyone. But if you are screening for a specific event where all you care about is the next few hours, then antigen testing is very effective. In either case, there is still a risk of false negatives especially with asymptomatic people, so testing is only one component of risk reduction. As antigen testing becomes cheaper and more available at the point of use, the question that arises is whether very frequent antigen testing, on the order of every day to every other day, with results available almost immediately, can actually be more effective than less frequent and more expensive PCR testing with results that take 24-48 hours to return. For now, the jury is still out.

There is not much new information on treatments. One of the most important messages that everyone should know is that if you or someone you know has significant COVID-19 risk factors and they are diagnosed with COVID-19, they need to be talking with their care providers about antibody treatments very early. They should not wait to need hospitalization. There have been concerns expressed over the last week about the effectiveness of the current antibody treatments considering the new variants. One of the beauties of this therapy is that the antibody cocktail can be rapidly altered to address the new variants. Multiple pharmaceutical companies including Regeneron and Eli Lilly, the two current producers, are already working on this. In related news, the University of Virginia just published a study that showed that monoclonal antibody treatment was 100% effective in blocking symptomatic disease when used in household groups. While it is not possible that every household with somebody with COVID-19 could be treated with one of the available antibody therapies, it would be very reasonable to consider the use of this therapy when there is somebody at significant risk in such a household. This is not standard of care, yet, but something for the medical team to consider.

As you listen to the news on vaccines and their competing efficacy and the possible impact of the new strains, it is almost as if someone is trying to make this as confusing as possible. Reported efficacy percentages are often referring to different measures. Are they talking about efficacy against any infection, or efficacy against symptomatic infection, and even then are they talking about efficacy against severe infection or death. Perhaps the most important point to take is that not a single death due to COVID-19 has occurred in an immunized person, including infections related to the UK or South African strain. Severe disease has occurred in less than 5 of 150,000 vaccinees in all the combined trials, including those in South Africa. This data has been validated in Israel where no COVID-19 deaths have occurred in the greater than 50% of the population that has been vaccinated. Going back to the beginning of this pandemic remember that because approximately 85% of people are minimally affected by a SARS CoV2, the most important issue has always been how do we prevent severe disease and death. Even with the growth of more infectious strains, we continue to demonstrate that vaccines can prevent severe disease and death. The vaccines are accomplishing the goal that we set out to accomplish. This is not the time to nitpick over differing efficacies.

We are routinely asked, “which vaccine should I get?” and the answer is very clear, “the first one that someone will offer you.” In certain populations where it may be difficult to get somebody back into a clinic for a second vaccination, the one-shot Johnson and Johnson vaccine, which should be approved for use in the United States later this month, maybe better for these groups when everything is considered. The stated efficacy is lower than the 2 mRNA vaccines, but the efficacy numbers for the J&J vaccine may be influenced by having been tested later in the epidemic when variant strains have been more prevalent in the areas where the vaccine has been tested. But even with that, the J&J vaccine has proven to be very effective in preventing severe disease or death. Do not hesitate to get the J&J vaccine. There is a worry that if J&J is used predominately in difficult to reach populations, some may gloss over the one-shot advantage and say that these vulnerable populations are being given an inferior product. But there are very good epidemiologic reasons to use a one-shot vaccine in these circumstances when there are concerns about getting people in for a second dose.