COVID-19 Mutations and Risks of the Delta Variant 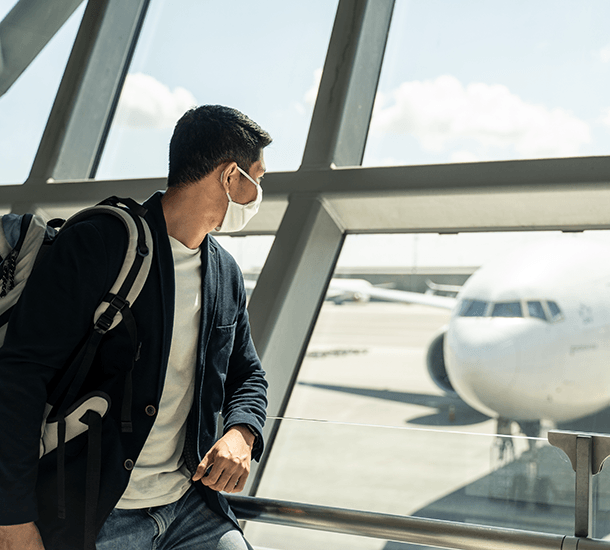 We have known about the potential for variants since the beginning of the pandemic. The SARS-CoV2 virus is a single-stranded RNA virus. Compare this to the double-stranded DNA that makes up our genome. Both RNA and DNA are essentially long strands of codes that tell cells how to make proteins including new copies of itself. The “double-strand” means that there are two strands of the code chemicals that exactly match up in a 1:1 pairing relationship that can’t exist in a single-stranded organism. Both types of nucleic acids strings are constantly bombarded by forces and compounds that try to change them. For the double-stranded nucleic acids, when one of the molecules that makes up one of the strands is displaced in some way, the cells’ proof-reading mechanisms look at it and recognize that the normal matched set is not there and usually are able to make a correction that returns the structure to the original. That can’t happen in single-stranded, so mutations happen regularly. Most mutations actually decrease the functionality of the virus so these variants go extinct fairly rapidly, but occasionally, a mutation occurs which causes the resulting protein to function more effectively. “Effectively” in the setting of a virus means more infectious through more efficient replication or making the host more ill so they spew more copies into the environment.

In the case of the Delta variant, the mutation seen caused a specific fold in the geometry of the spike protein that causes it to bind to target cells more efficiently, initially in the respiratory tract, but then in many cell types throughout the body. This more efficient binding leads to increased viral replication and increased overall viral load. For Delta, this increased viral load conclusively leads to a higher discharge of virus into the environment by an infected individual, and when a new uninfected person unwittingly gets this virus into their eyes, nose, or lungs, the increased binding efficiency means that a lower exposure can more effectively overwhelm the bodies initial defenses and cause infection, and then the cycle repeats.

The vaccine causes the immune system to counteract this in multiple ways, the three most important being, disrupting the binding process, directly disabling the free virus before it can infect a new cell, and killing off infected cells before they can effectively support much replication of the virus. Fortunately, with all the known variants, including Delta, the mRNA vaccines (Pfizer/Moderna) and the Johnson & Johnson vaccine effectively do disrupt replication. The AstraZeneca and Bharat Indian vaccines are reasonably effective against most variants, including Delta, and the upcoming Novovax vaccine maybe even better.

So, the bottom line in all of this is that if you are not vaccinated and you happen across someone in your environment who is spewing virus, you are at much higher risk of becoming infected, and theoretically more ill (although the latter has not been borne out in real-world monitoring). In fact, the “6 feet and 15 minutes” guideline that we have been using for months may significantly overestimate how much contact is required before an unimmunized person is likely to come in contact with enough viral particles to become infected. It does also mean that an immunized person can also become more easily infected, but even if this happens, the fact that the immune system is already at work, means that the infection effects will be greatly attenuated, the viral load will be greatly reduced, and therefore, their infectiousness will also be much lower.

The implications of all of this for the world’s fight against COVID is that regions with lower rates of vaccination are seeing much more rapid growth in the number of cases until the number of people with immunity either from vaccination or from natural infection reach a high enough level that herd immunity effects begin to kick in. We have enough data now to estimate that at a combined immunization/prior infection rate of 60% to 70%, large explosions in case growth will be prevented, but anywhere where the combined rate is lower, their only rapid defense is to go back to lock-downs. Australia is the perfect example of this. Through border controls and strict public health control measures, Australia has effectively minimized the amount of circulating virus in the country. Now, however, with this new, more infective variant, it only takes a small number of infected people to touch off rapid chain reaction outbreaks. The Australians have had to return to a defensive line of tight restrictions.

This same scenario will begin to play out anywhere in the world where the overall immune rate is low. This is the reason why the World Health Organization called earlier this week for the world with an overall vaccination rate of just over 10% to go back to masking and social distancing indoors. The US CDC countered that this guidance does not need to apply to the US because our overall immunity rate is high.

Yes, people who have not been vaccinated, whether by choice, by age, or because they have medical reasons for which they cannot be vaccinated, are likely at higher risk of infection than they were earlier on in the pandemic, but their risk almost entirely comes from others in the same boat. People who are vaccinated are much less likely to get infected and even if infected, will discharge much less virus into the environment making them much less of a vehicle for infecting others. The CDC points out that children are generally still not at high risk of significant disease (yes, it happens, but at rates similar to their risk of significant disease from the flu), and even if infected, they are still not effective vehicles for spreading the virus. Their ability to spread is likely higher with the new variant but still attenuated versus adults. The relatively tiny number of people that cannot be vaccinated for medical reasons need to be protected, but that is generally by helping them to be able to more easily socially distance and, ideally, decreasing their potential exposure through increased community immunity, not by requiring the whole of society who are at low risk to mask and endure social restrictions.

This pandemic is best viewed not as a single process for the whole world, but as a series of regional, but linked epidemics. The regional-level response to all of this is going to be based on that region’s perception of risk. That in turn is guided not only by the facts, but also by the way leaders and media react, and by what the region’s experience has been to date. In the United States, for example, there are several states which have never perceived risk as high, and this is reflected in lower vaccination rates. They will likely see higher disease rates until either increased illness and death changes their perception and larger numbers choose to get vaccinated.

Moving on to what this means for businesses and individuals. If you are vaccinated, Delta should not greatly worry you. The newest data is that the mRNA vaccines and likely even the Johnson & Johnson vaccine are not significantly less effective against Delta, so in any community that has a reasonably high vaccination rate, Delta should not affect people’s comfort with venturing into the community including a return to the office. That being said, many employers who were considering moving up return-to-office plans from September to mid-summer, have put those plans on hold for at least a couple of weeks as the situation clarifies itself with regard to the real impact of the Delta variant. For people who are not vaccinated, except for those who have firm, fixed objections to vaccines on other grounds, this is the time to help them to rebalance their perception of risk given the new realities of increased infection and disease risk with the Delta variant and the continued excellent (but not perfect) safety record of the vaccines with now over 3B doses administered worldwide. As a side note, the goal for worldwide vaccination is about 11B, so we are about a quarter of the way there.

Moving back to disease rates for a moment; governments have focused on these numbers for months and continue to do so. As leaders see rates starting to increase with growth in the proportion of Delta cases, there is often a knee-jerk reaction to reinstate various restrictions. Regardless of whether or not this makes overall sense and regardless of the fact that people who do have concerns can, in the US, UK, and most of Europe, get vaccinated at will, there is a risk of government action. In the US, most leaders understand the information as I have presented it and are resisting calls to take action to protect mainly those who choose not to protect themselves. But, in the UK and Europe, reinstating restrictions is more palatable, especially in regions of Europe that have not yet reached the point of vaccination availability on demand for most people.

As far as schools go, there is good data that school children have never been highly affected by the virus, they are effective vectors of the disease, and now, the vaccine is available to faculty (and, in the US at least, even to most older children). Delta may change that, but for now, the risk does not appear to be significantly increased, but this needs to be watched closely. Unless the Delta risk to kids is much higher than we are seeing at present, or another variant happens, it is not likely that return to the classroom for next school year will be delayed for the US, nor in most of Europe and the UK, but with the same caveats as with offices. While there are some concerns about increased rates of transmission and more serious illness for children, as of now, these concerns do not appear significant enough or supported by real-life experience to overcome the demonstrable risks of keeping kids out of in-person learning environments for a longer period.