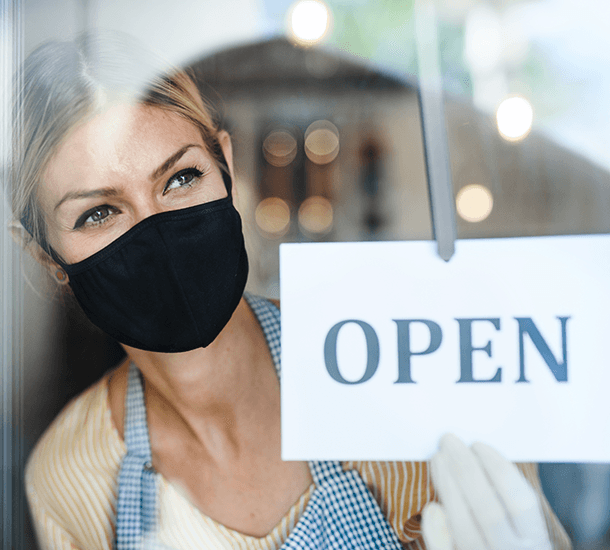 Recent statistics show us is that somewhere around 60-70% appears to be where herd immunity starts to kick in. Putting the US information together, the country is probably somewhere just over 50% immune in some way (from vaccine or infection) and increasing by about 0.5%/day, so by mid-May around 60% immune and by end of May in the mid to upper 60’s. But remember, you can’t look at this as a monolithic pandemic… it’s a series of linked regional epidemics, each with its own characteristics, but especially influenced by the great mobility of today’s society. So, some states or even sub-state regions will reach herd immunity effects sooner and some later. Some would say we’re already starting to hit herd immunity in some areas, but true herd immunity only happens when there is a rapid downward inflection of the case rate curve and we’re not there yet as our decreases are still linear in most places.

Researchers found that 21 days after a single dose of either the Oxford-AstraZeneca or the Pfizer-BioNTech vaccine, new COVID-19 infections had fallen by 65%. Therefore when looking at herd immunity estimates you can focus on the population who have received at least has the first dose. While full vaccination requires both doses and is still very important, the greatest improvement in risk actually comes after the first one.

Next is one of the most important recent findings: Remember that we have been hearing all along that the two mRNA vaccines reduced the risk of disease by about 95%, but what does that really mean to your personal disease risk once you are vaccinated? The CDC published studies late last week that showed the incidence of COVID infection in a vaccinated population is 0.008% or 8 out of 100,000. On top of that, other studies showed that once vaccinated the risk of passing on an infection, even if you are one of the unlucky ones who does get infected, is likely much reduced (not yet quantified) because the viral load in someone vaccinated is significantly less, so the effective reproductive rate is much smaller than the reproductive number we have seen for SARS-CoV2 in an unvaccinated population.

Why, then, is there any question about needing to keep wearing masks and social distancing? For now, there is still a non-trivial number of people who may be at risk and have not yet had an opportunity to get vaccinated. For example, for those over the age of 65, which is the highest risk group, the vaccination rate is still only at 80%. As long as those people who want to get vaccinated, but can not, are out there, many would argue that we need to do everything we can to minimize the circulation of virus in our general population to help protect them. Masking and social distancing still will contribute to keeping the community viral load down. But once the vaccine has been made available to everyone who wants it (and then add a couple of weeks for the vaccine to have significant protection), we should be at or near herd immunity. Once the only ones left for society to protect are those who choose not to be vaccinated, the argument for disrupting people’s lives to protect people who choose not to get vaccinated begins to lose water, especially when the risk of a vaccinated person acquiring the disease and then passing on to others is somewhere around 1 in 20,000.

Notice how most news about variants has faded away in the last week or so. Much of that is because 45% of infections in the US now caused by the UK strain, B.1.1.7. But the vaccine is showing to have no observed significant difference in effectiveness against that strain here or in the UK where it is almost completely the UK strain. The same is true for the new Indian strain, where they have had, unfortunately, much opportunity to look at the effectiveness of the Pfizer vaccine against the new “Indian strain” and no issues there. The only significant strain for which there is some concern is still the Brazilian strain, but even there, a very well done study by Yale looked at the comparative effectiveness of one of the Chinese vaccines (which is the most widely used in Brazil) and the effectiveness was comparable to the effectiveness in other areas of the world.

This issue of variants continues to be the main concern that drives authorities to keep social interventions in place even after vaccinations. Mutations do occur and as vaccination rates go up if there is still a widespread circulation of the virus, it raises the chance that a mutation could occur that escapes the vaccination. That risk is low, but because the risk is not easily quantifiable, public health experts are choosing a safer path of continued restrictions.

Other scientists maintain that the risk of a significant escape mutation in a coronavirus, any coronavirus, is actually very low. Why is that? One reason comes from a study this last week that showed that many elements of spike protein are shared amongst all types of circulating coronaviruses (including the common cold coronaviruses and the original SARS and possibly even MERS versions.) A study pre-published this week focused on just 2 antibodies (there are many more that develop in response to COVID infection or immunization), and these two were found to have broad cross-protection against all types of coronaviruses. So not only does it appear that disease or vaccine-induced antibodies should be effective against SARS-CoV2 variants, but there is significant reactivity against all circulating coronaviruses, not just COVID-19. This includes variants. Remember that mutating to gain effectiveness of infection which not gaining a mutation that mitigates the infection would take exceedingly bad luck, but does highlight the importance of a worldwide effort on caseload and thus circulating virus reduction. Of course, this begs the question “why does our existing immunity against the more mundane coronaviruses not adequately protect us against the newer versions?” and that’s a question being actively studied. For now, these new antibodies that are engendered by COVID or vaccine appear to have broad-based and stable virus-neutralizing effects that will be difficult for a virus to mutate against while still maintaining virulence.

Over last weekend, the US FDA and CDC jointly announced lifting the “pause” on the use of the Johnson & Johnson COVID-19 vaccine. This was not unexpected as the data is very clear that the risk of serious side effects of the Johnson & Johnson vaccine, including the uncommon type of blood clotting events that prompted the pause, is less than the combined risk of acquiring the disease (if unvaccinated) and the many problems (including much more common blood clotting problems) associated with COVID-19 infections/disease.

What was surprising was that the joint CDC and FDA recommendations did not significantly modify the Emergency Use Authorization to more strongly note the observation that almost all of the clotting problems have been in women 18-49. The recommendations did add a paragraph to the vaccine information sheet that noted this association and told providers and recipients what to watch for, but there was no specific recommendation that a different vaccine may be a better choice for this group.

In assessing the data and the reports from the CDC and FDA, we agree that the Johnson & Johnson vaccine is preferable to not being vaccinated, but for people in the observed “at-risk” group of women age 18-49, if the person has a choice, or has a reasonable expectation of having a choice in the near future, one of the mRNA vaccines (Pfizer or Moderna), would be preferable. Our considerations for people outside this group have not changed – that is, the best vaccine to get is the first one that someone is willing to put in your arm. It should be noted, especially outside of the US and Europe, people should be very careful about the growing number of counterfeit vaccines in circulation.