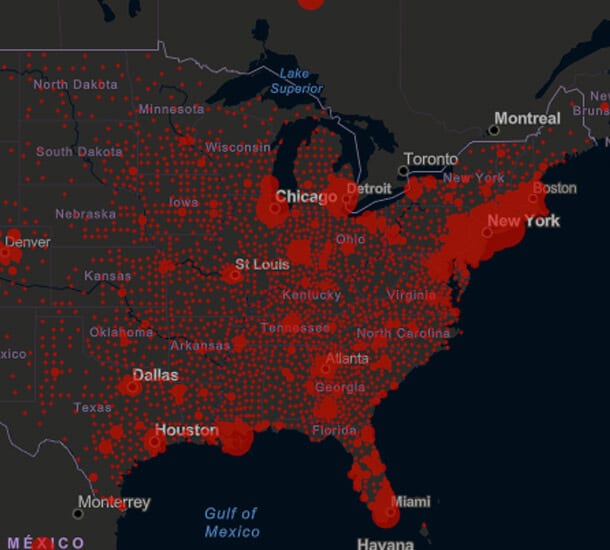 As you may remember from last week’s update, it was remarked that over the weekend, we would reach 1M cases globally. We actually reached that by Friday, April 3rd. Now, it looks like we may reach 2M cases by the end of this weekend, April 12th.

New York City still remains the most affected urban area in the world, but current estimates are that hospitalizations and patients requiring ICU care will likely peak this week.

Other peaks are occurring in much of the US over the next 2 weeks including California and New Jersey, which are said to peak next week. Of note, the first major epidemic in the US was in Washington State and it is clear now that they peaked there last week and they are now actually exporting resources to other areas, including New York. So there is light at the end of the tunnel!

Internationally, cases have peaked in most of Europe, but not the UK, which, unfortunately, is not showing signs of a peak yet. Other areas still in the case growth phase include Singapore and Japan (which just yesterday declared a State of Emergency). In neither case does this represent a second wave, but an unexpected rapid increase in what had been a fairly slow steady increase. The reason for this is unclear in Singapore, but maybe an aberration brought on by relatively small numbers. In Japan, they had not initially implemented strict social distancing, so this represents a similar rapid bump to what was seen in the US prior to the institution of more strict policies.

There are 3 different peaks you will hear about and it’s important to try to know which is being discussed:

The most important peak in terms of response deals with peak resource use. Notably, the estimates on the timing of this have been excellent, but estimates on actual resources have mostly been over-estimates.

Most news reports deal with peak cases because those are big numbers, but as we have discussed before, reporting numbers of cases accurately is hard. It is a combination of the actual number of infections, the proportion of infections that actually cause illness, policies for who gets tested, the number of tests actually available, and finally, the accuracy of the test. In South Korea and Singapore, they have been very consistent on who gets tests and on the availability of tests, so tracking cases there is useful, but in the US, testing policies and testing available has been extremely variable.

Last, peak, is peak deaths. This will likely trail peak cases by about two weeks, and peak resource utilization by around a week.

So whenever you are hearing news about a peak, make sure you understand what peak is being discussed.

Other Key Points to Reference:

Current recommendations regarding everyone wearing masks in public are not to protect mask wearers from catching the infection, but to protect others from someone who may not realize they are infected. Not wearing a mask does NOT increase your chance of becoming infected, but may increase someone else’s chance of being infected by you.

There is no significant new news on treatments this week. Data still looks good that the combination of Chloroquine or Hydroxychloroquine with the antibiotic Azithromycin may be very helpful. Note that most states have put strict limitations in place against prescribing for prophylaxis or just to have on hand. This is to protect supplies for those who need the medication. Remdesivir is still undergoing testing, but this medication is administered by IV only and is only available in limited circumstances.

Because of the shortage of testing, both the CDC and WHO have recommended a symptom-based approach to quarantine. If you develop symptoms consistent with COVID-19, you must remain quarantined until a minimum of 7 days after symptoms begin AND 72 hours symptom-free AND you must then wear a mask in public for 72 additional hours.

Lastly, in regard to projections on summer activities, at this point, unless there is a determination that antivirals are highly effective in preventing bad outcomes, we expect that many summer group activities will be curtailed. This would include camps and many sports events. No decisions have been made on this and there is a reasonable likelihood that medications under testing will be effective, so don’t cancel your plans yet.

← Prev: A Look Into the Latest COVID-19 Global Numbers Next: COVID-19 Update: Peaks and Outlook →